I have debated whether or not to publish this post, and decided to do so because it details an experience that I think is probably shared by other chronically ill patients. This post mentions a comment that was made regarding suicide. Please know that if this topic is particularly upsetting or triggering to you, I completely support your decision to skip this post.

I have been having trouble making a speech in one of my classes, part of a required assignment. My speech is about juvenile arthritis. Ironically, because of complications stemming out of this disease and out of acute illnesses I have been facing, my ability to speak right now is very on-and-off, and when I can speak my voice sounds terrible and I have no ability to project.

"How long has your voice been like that?" one of my classmates asked me somewhat mockingly as we participated in a small group activity together. I had not previously spoken to this classmate and still do not know his name. I had just returned from the rheumatologist to attend this class, and given my extremely high pain level at the time, I had little patience for prying questions from rude boys.

"It's been on-and-off for about three weeks," I responded honestly, doing my very best to get the words out. Several sets of eyes were staring at me, awaiting my response. I had missed both days of this class the week prior, so people knew something was up. My voice is weak, and sounds strange, but I am still participating as much as I can. My classmate leaned back in his chair, smiling in the least friendly way you can imagine. What came next absolutely shocked me. He looked me directly in the eyes.

"I would kill myself if I were you."

There are so many responses that I have mustered up in hindsight, but in the moment all I did was stare. I did not respond at all, and had no idea what to say. I could not believe he said that to me, and even more than that, I could not believe that one human being would say that to another. Perhaps we should all be required to take an introductory class about compassion rather than English. I stared blankly at him, without even trying to form words, wondering if he realized how insensitive he had just been. I was absolutely appalled. I could not tell if I was angry, upset, or apathetic. He offered no apology. He turned to his computer and pulled up the webpage for our assignment.

I pondered this interaction for the rest of the class. I texted a friend to tell her what had happened, mostly just because I could not believe it and needed to type it out. I have experienced a lot of rude comments and insensitive remarks from classmates - I was diagnosed in middle school, after all. But no one has ever said this to me before, and frankly I did not think anyone ever would. I dedicate way more space on my blog to positive experiences with friends and even with strangers than I do to negative experiences, and I want to be clear that my experiences overall are disproportionately positive. In general, people are very kind and understanding, much more so than I think an outsider might expect. Still, there was something about this comment that rendered me unable to focus for the rest of the class period. I could not tell if it was his words or my medications making me nauseous. I could not think of why he might say something like that. 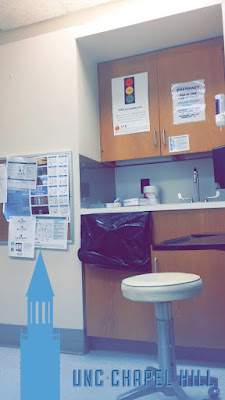 The class that this happened in is very small, and my professor knew that I was in a lot of pain, because I had explained to her that I was unable to give my speech and frankly it has not been super difficult to read my pain levels lately, because I just feel absolutely miserable and can barely go two minutes without visibly wincing from intensified pain somewhere in my body. She asked our small group a question and all of the members of the group looked at me to answer (since they had not paid any attention whatsoever to our assignment), and my professor, realizing what was happening, said, "I need someone to answer who didn't write up on the board" to strategically work me out of the running for this response. She was quick-thinking and respectful, two of my favorite qualities. I looked at her and mouthed "thank you" without even consciously thinking about it. She offered a slight, knowing smile and awaited answers from the boys in my group.

After class, I went up to her to apologize for being unable to deliver my speech for the fourth class in a row. I offered to bring her my health documentation. Refusing medical proof, she asked, "How about you just keep breathing?"

I am unsure whether or not she heard what the guy in my group so insensitively told me, but it was a shattering contrast, possibly the only affirming way to leave the classroom. I will admit that over the past few days I have been thinking much more of the guy's comment than of my professor's. I wish that I had the ability to focus only on what is uplifting, but his comment caused my heart to sink, not just for myself but for all people living with chronic pain and chronic illnesses.

All my classmate knows is that my voice was on-and-off for three weeks. He has no idea about the juvenile arthritis, the severe muscle pain, the costochondritis, the fevers, the lung inflammation, the upcoming jaw procedure, the upcoming sinus surgery, the semester I spent with strep throat, or the semester I spent with a combination of severe asthma, allergies, and sinusitis. He has no idea that I went to the doctor four out of the past five days and that I am now just as well-known at the UNC campus health center as I was at Tulane's. He has no idea that I am supposed to be wearing a protective mask everywhere and that I am still at risk for more infections. He has no idea that yesterday morning I left all of my dignity in the voicemail box of the only doctor in North Carolina and any of its bordering states that specializes in exactly what I need. He has no idea that I have been prescribed 21 more days of antibiotics and 14 more days of oral prednisone, and that we have stopped checking bloodwork because we know it is going to be bad. If he knew about all of that, what would his response be? If three weeks of misery made my life unworthy of continuation in his eyes, what would he think about a year of acute illnesses, or about seven years of a chronic illness?

I went back to my dorm room after the class and laid between two cold compresses, one on my chest (I have been diagnosed with costochondritis this week and it is unbelievably painful), and one on my back and neck, where my muscles have been tight and inflamed for reasons that are not totally clear. I debated what to do next. I needed to be productive, to do readings and send emails and type out assignments. I needed to respond to text messages and send out cancellations for all of the activities my illness is causing me to miss. I needed to schedule times for my friends to hang out in my dorm with me, because I refuse to be a dorm room shut-in even if I need to be laying down with ice packs a lot of the time. My mind was stuck on the insensitive comment. I did not know what to do next.

How about you just keep breathing? I asked myself. And so I did.
Posted by Rachel Sauls at 9:56 AM