As many of you know, I recently returned from an AP Literature trip to England. When we first arrived in Manchester after a long flight from the United States, we met up with our tour guide for the week, who was patiently waiting for us in the airport. After a couple of brief conversations with him, in which we covered my arthritis, veganism, and delayed luggage, I suddenly realized that I was the "problem child" of the group. There I was, not even five minutes into the trip, and already I had a host of issues that would require repeated efforts to accommodate. I felt terrible, but there was little I could do, and so I focused on making myself as flexible as possible. 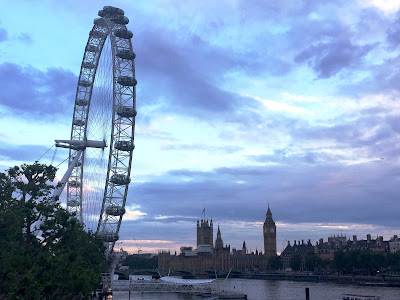 Luckily, my arthritis did not flare at all during the majority of the trip, and it was only slightly aggravated during the last two days in London. I tried to keep this under wraps, but our tour guide totally did not believe me when I answered his inquiry about how I was feeling with a overly positive response (sometimes I'm a good liar, sometimes not so much), so I ended up reluctantly confessing that my knees were a bit swollen. I insisted, however, on fully participating in all that the day had to offer and on keeping up with the rest of the group. Really the issue was the fatigue, but I just plowed through for 10 days, fell asleep before anyone else every night, napped on bus rides, and allowed myself to collapse once I got home. I even earned the nickname "Grandma" for how early I retired to my bed, which I embraced because everyone tells me I'm an old soul anyway and I'd rather be thought of as a grandma than be thought of as sick.

The feeling of being a "problem child" has been an unwelcome yet familiar one for me ever since my diagnosis. Even within the rheumatology world, I was well aware from a young age that I was a complex case disliked by my doctors. No one likes to feel like they can't help someone, or like they are not good enough at their job, and I suspect that sometimes the mysteriousness of my case served as a let-down to the savior complex present within many medical professionals. Even when I was surrounded by people experiencing my same illness, I was still the "problem child." Of course, I had no idea what to do about this. I couldn't just make my body simpler or provide any answers for them. It became a strange learning experience in which I began to accept that I am often the odd one out and make light of it through humor.

Last night my joints finally retaliated to the very active trip, particularly my knees, hips, and ankles. When I woke up this morning I decided, "I have too much to do, I don't have time for a flare," and I popped up out of bed to get to work cleaning my room and finishing up this post. But as I took my first few steps, which were embarrassingly wobbly, it became apparent that my hasty declaration was less empowering than I expected and more painful. So much for that. But even though I am not feeling particularly strong or courageous or energetic today, I am going to do the things I need to do and be grateful that although I am a "problem child," I still get stuff done.

It is true that I sometimes need more from people than my peers do. It is true that feeling like a "problem child" places a terrible burden on me that I sometimes struggle to carry. But it is also true that despite these things, there are people that I love and people that love me. There are things we cannot change about ourselves, no matter how hard we try or how much water we drink from a Roman bath. Nine times out of ten, we become closer to rather than further from the people who offer their help to us. The ten percent of the time in which receiving help sort of backfires and we are treated differently by the person who helped us is always the first to come to mind, but it is not the norm and we cannot allow ourselves to be jaded by people who are unable to see past arthritis or treat us like we are anything more than a walking illness. It hurts tremendously, but it is no reason to forego assistance when we need it the most

Last summer, when I experienced a painful day of arthritis fury at Governor's School, one of my teachers sat with me for a bit in preparation for a long journey down the stairs in a building with no elevator. I was upset and frustrated about the whole situation, and I repeatedly assured him that I would be fine going down on my own, because the only feeling worse than being held back is holding other people back. He was quiet for a minute, and then responded by saying, "A world where people don't help other people, where that's a burden to them... That's not a world I want to live in." That has stuck with me a lot. I don't want to live in that world either, and part of creating an ideal world where help is freely given is having the grace to say, "Yes, I'm sort of a problem child, yes, I need help right now, thank you for helping me."

Any situation that forces or allows us to become closer to people and to expand our vision of what humanity can be is an opportunity rather than a curse. Maybe being a "problem child" isn't the worst thing to be.
Posted by Rachel Sauls at 8:37 AM